This is a 60 year old healthy man who presented with gross hematuria. He had a 20-pack year cigarette smoking history. He stopped smoking 10 years ago. A CT scan of the abdomen and pelvis was normal. An office flexible cystoscopy identified a 3 cm papillary tumor. A transurethral resection was performed and the pathology was a high grade Ta (non-invasive) bladder cancer. Since the intial tumor appeared to be low grade by endoscopy and there was no CIS I did not proceed with BCG despite the final pathology of high grade. His next endoscopy was 3 months later. I found three very small low grade appearing non-invasive tumors and cauterized them easily and thoroughly in the office (Figs. 1–3).

The next cystoscopy was 2 months later. There was a single 3 cm papillary tumor which was removed by transurethral resection (TURBT). The pathology was low grade Ta. In the following cystoscopy two areas of tumor were seen. A 2 cm papillary tumor which I thought was another low-grade Ta tumor was located at the posterior wall (Fig. 4) and a small low grade appearing papillary area was seen at the left bladder neck (Fig. 5). A TURBT was performed and the pathology indicated the tumor at the posterior wall invaded the lamina propria, i.e. T1. There was no muscle identified in the specimen. The small tumor located at the bladder neck was low grade Ta. 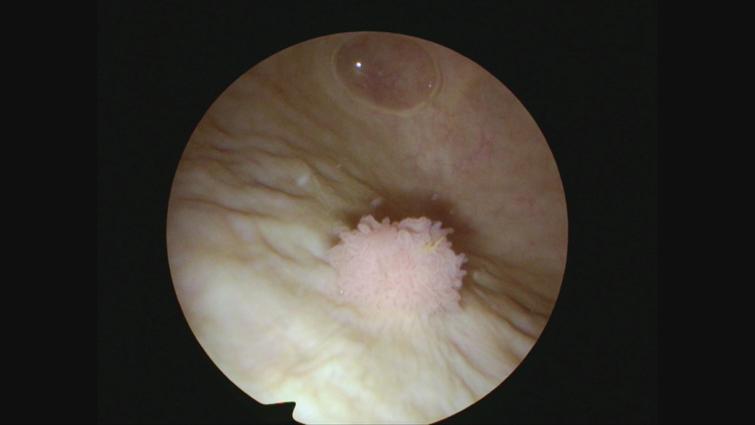 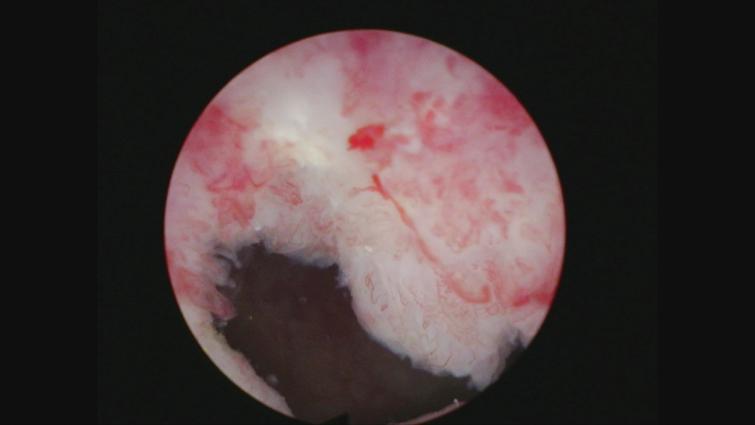 The guidelines are quite clear in indicating a repeat resection is required even though I was confidant I had removed the entire tumor which I thought was most likely confined to the urothelium.

I have been impressed with the concept of an en bloc resection although I have not routinely been using this for the standard TURBT. In this instance the area of prior resection was easily identified (Fig. 6) and I used the bipolar resectoscope system with a standard right angle loop to cut into the bladder wall in a circumferential manner around the scar in an effort to elevate the tissue while minimizing cautery (Fig. 7). I then used a biopsy forceps to easily remove the single intact specimen (Fig. 8). There was no tumor in the specimen (Figs. 9–11). The patient has started a course of intravesical BCG.

Scar from prior TURBT. 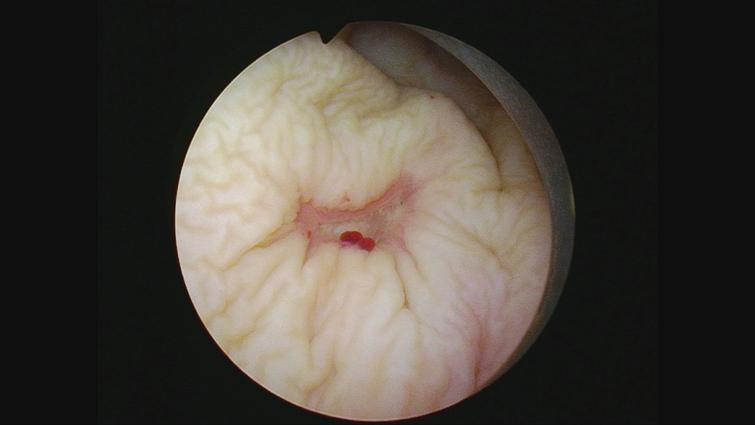 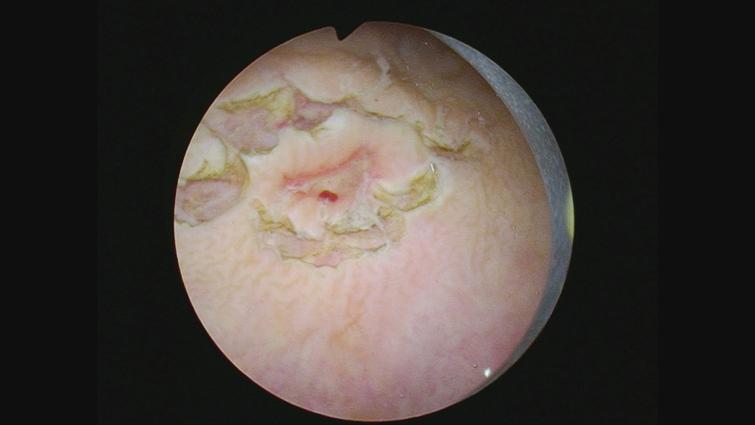 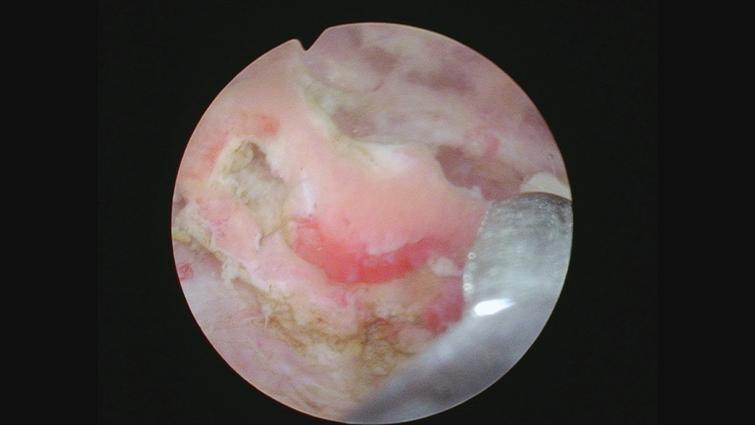 Bed of the resection site indicating depth of resection. 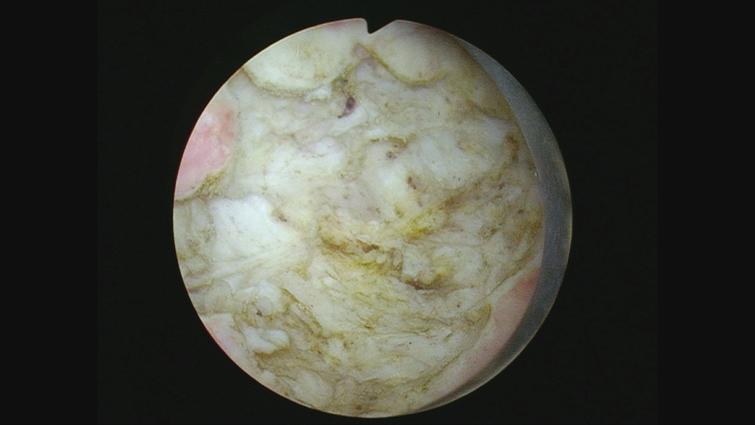 Pathology specimen from the en bloc resection. No tumor. No cautery artifact. 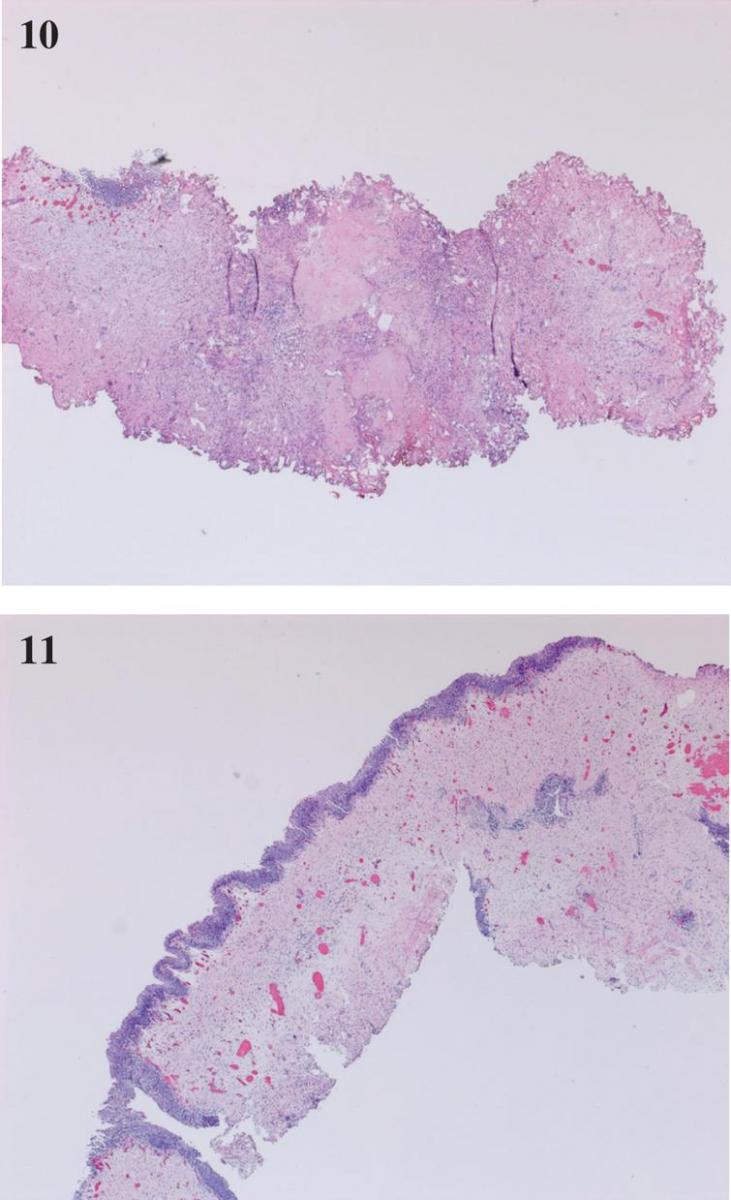